With the end of the “War to End all Wars” still fresh in their minds, and with the fraternal feeling for their comrades-at-arms still in their hearts, many returning veterans sought something to erase the agony and to fill the gap. Many turned to Masonry. In 1919, a group of Masons in Ottawa organized with the sole purpose of forming a lodge to meet the growing demand. A formal petition was presented to the Grand Master, Most Worshipful Brother F.W. Harcourt, for a Warrant from the Grand Lodge of Canada in the Province of Ontario to hold a new lodge.

The majority of the Charter Members belonged to Lodges in Scotland – with this Scottish heritage, no other name but St. Andrew’s would suffice.

As the Twenties roared in, optimism for the future replaced the horrors of the past. So began a decade of unparalleled growth and the “I-don’t-care” attitude towards enjoying life, which roared virtually unchecked for ten years. Masonry also grew. The Warrant was granted, and almost 100 years ago, on the 10th of January, 1920, St.Andrew’s Lodge was formally constituted and denominated No. 560 on the Register of Grand Lodge.

The first regular meeting of St Andrew’s Lodge following its constitution, on February 2nd, saw three initiations, a beginning of 32 initiations by the end of 1920; St. Andrew’s was off to the same roaring start as the decade. In fact, in 1920 alone, the Ottawa District saw the institution of three new lodges: St. Andrew’s No. 560; Acacia No. 561;and Ashlar No. 564, joining Sidney Albert Luke No. 558, which was constituted in October 1919.

The Next Three-quarters of a Century….

St. Andrew’s Lodge began its life with 54 charter members. From this modest beginning, through good management and continuing leadership, and by practising the principles of Brotherly Love, Relief and Truth, the Lodge has prospered. Since the beginning, the brethren of St. Andrew’s Lodge were destined to provide outstanding leadership, not only to the Lodge, but throughout the Ottawa Valley and across the Province of Ontario.

During the years, St. Andrew’s has been blessed to have as members these dedicated and competent men. Some of the finest ritualists in the Ottawa Masonic area have been members of St. Andrew’s Lodge. Many of its Past Masters have served with distinction on venous District Committees and have gone on to be leaders in the Ottawa Masonic Districts. Among our members, many have prospered intheir individual spheres of endeavour. Thus, they have contributed their talents and quallties to the community, as well as by earning from the community a respect and quiet recognition for this Lodge and Freemasonry in general.

R.W.Bro. John Norman Salter, a dedicated charter member and Lodge Historian, served the Lodge with devotion as its Secretary for 38 years and until his health prevented him from carrying on with the several responsibilities of that office.

Virtual Lodges in the time of the COVID-19 pandemia

It has been 3 weeks since the M.W. Bro. David J. Cameron commanded all masons in Ontario the closing of lodges and suspension of all masonic activity resulting in public 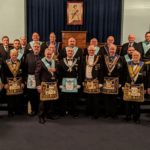 On the occasion of the 100th-anniversary celebration, brethren from St. Andrew’s Lodge 560, met at the Masonic Hall in Westboro on January 10, 2020.

In the same way that a group