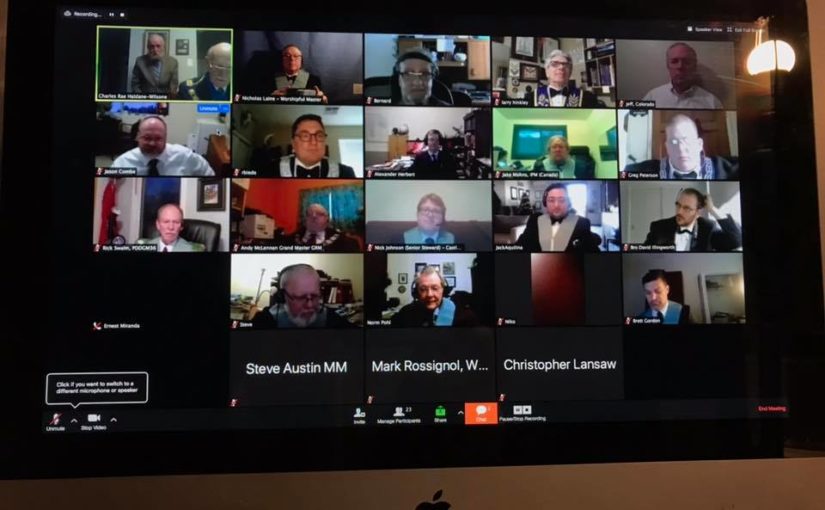 It has been 3 weeks since the M.W. Bro. David J. Cameron commanded all masons in Ontario the closing of lodges and suspension of all masonic activity resulting in public gatherings. And the Grand Lodge of Canada in the Province of Ontario is not the only Jurisdiction that did so. Most Grand Lodges and concordant bodies around the world have circulated the same instruction to their members: Don’t meet, stay home, stay healthy, stay safe.

As a consequence, we all who are lucky to be healthy and following the recommendation of staying home maintaining our social distance, share a common feeling. We are away from the possibility of doing those things we love most, meeting and sharing with our brethren. The day of  getting together in a Lodge room once again or at a festive board may look distant.

Fortunately for our society in general, and for Freemasons in particular, as the astronaut Chris Hadfield pointed out a few days ago, “there’s never been a better time to self-isolate”. So many people have access to the internet, and so we do.

Castle Island Virtual Lodge No. 190, G.R. of Manitoba is a perfect and regular Masonic Lodge, chartered by the Grand Lodge of Manitoba in 2012. It is formed by a group of enthusiastic and experienced MM who belong to physical lodges in jurisdictions of four Countries and five different time zones. They meet quarterly using the Zoom platform, a web conferencing system that has gained a lot of popularity in the corporate market during the last couple of years.

Endeavour Virtual Lodge 944, G.R. of Victoria, is also a perfect and regular Lodge, chartered by the United Grand Lodge of Antient, Free and Accepted Masons of Victoria in Australia, on Dec 15, 2018. It is formed by a much younger troop, but no less proficient in the Royal Art of Freemasonry, who also belong to physical Lodges from different jurisdictions of Australia, USA and Canada. They also meet quarterly using the same platform.

While Castle Island Lodge is a normal Lodge who happens to meet online with the main purpose of giving Masonic Education to their members and visitors, Endeavour Lodge is registered as a Lodge of Research and is also focused on this offering. Both Lodges are considered sister lodges and have a lot in common, starting with the fact that both meet online, their members attend the meetings in full regalia, up dressed and following the ritual word by word, and both feature world class masonic education, lectures, discussion and entertainment.

For 100 reasons we know or can imagine, as a Lodge that was formed in and for the physical world, and that thrives to stay as such for 100 more years, St. Andrew’s Lodge 560 is meant to continue existing as a physical Lodge. But times as the one in which we are getting into right now, may make us think on the possibility of staying close while being away, in the same way brethren from those two lodges do.

As it happens with all that is good in life, the Season 1 of the Candidate Zoom Series came to an end in May 2021.

This initiative started with the idea

Last month we had a well-attended virtual Robbie Burns celebration. Many thanks to R.W. Bro. Gillis and Bro. Myall for a great presentation. It was nice to see so